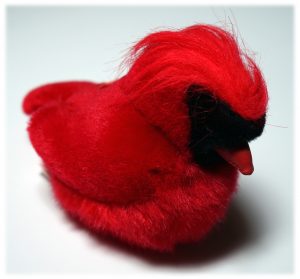 Today marks the 6th anniversary of my writing The Cardinal That Kept Quitting speech. It was written for my completion of one of the projects in the Storytelling Advanced Manual, part of Toastmasters International’s communication track towards becoming a Distinguished Toastmaster, at the time. The objective of the project was to write a story with a moral. This was something I had never done before. My husband and I had been on a camping trip not long before then where we encountered a persistent cardinal that kept attacking the windshield of his red truck Explorer. I wondered if I might be able to come up with some sort of life lesson and story about that cardinal. I pondered and thought hard about it. It came to my mind, the idea that sometimes continuing to be persistent isn’t good. That poor little red cardinal would probably end up hurting himself badly had not my husband move his truck to a different location. The idea that sometimes quitting can be good came to my mind. I decided to do a little research on the internet to see if anyone else agreed with me. I didn’t want to share my idea if it was too far out from the ordinary. I tried several search words related to my idea and ended up stumbling upon a speech by Deepak Malhotra, a Harvard professor. It concurred with my thoughts about how sometimes quitting, not being persistent to a fault, can be a good choice. He gave the example as how quitting one’s job may be a good choice in certain circumstances. In my speech, the cardinal tries out and quits several jobs till he finds a job which makes him happy. The cardinal in my speech uses parts from his previous jobs to build a toy for a little boy to help make him stop crying. The walnut sailboat idea was from a childhood memory of my Dad and I making and racing our little walnut sailboats together. 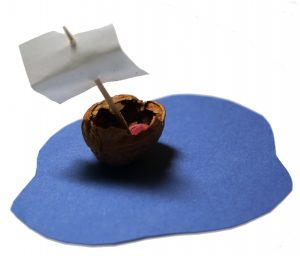 I delivered my speech, the same day I wrote it, at my ACE Toastmaster club meeting that night. It was well received. The story of how I eventually went on to publish my book entitled Flip Flap Try . . . A Cardinal’s Journey goes on from here. I will have to share that story another day.

Janet’s speech at TV Toastmasters Club (another club Janet attends) can be viewed at https://www.youtube.com/watch?v=xKt_k-Y5OZ4.  The speech begins about 20 minutes 46 seconds into the meeting.