On December 8, 2015, I gave a speech at Seven Hills of Cincinnati Toastmasters club. It was entitled: The Penguin That Couldn’t Talk. I was at the part of my speech were the three penguin friends were lost. “Scooter and Scamper were wondering around aimlessly, not sure which direction to go. ‘Squeak, Squeak!’ (Stay put) ‘Squeak, Squeak!’ (Stay put) They stopped; formed a huddle, trying to stay warm in the frigid Antarctic weather. Snow started forming on their backs, making it harder for someone to find them, if someone was looking for them.” I could sense my audience feeling the gravity of the situation in which my three penguin characters were. I paused for a moment, happy my story was being well received, then went on and finished it. One of the members said something like “That was good.” Coming from him, someone who had been negatively critical of some of my previous speeches, it meant a lot. His positive reaction to my speech, helped to keep me believing in my story through all my struggles 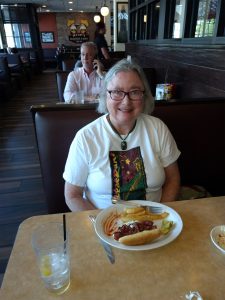 On January 30, 2018, I sat down in a grassy park-like area near the bed and breakfast in Palm Springs, Florida, where my husband and I were staying at the time, and started working on my book. I had walked to the beach in the morning, by myself. (My husband was working.) It was 68 degrees Fahrenheit. I was relaxed. It was such a joy, imagining what my characters would say. I had lunch at Too Jay’s Deli near by. I signed up to work with my book coach a day or two later. 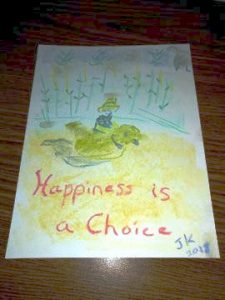 On March 27, 2018, I drew a “Happiness is a Choice” picture. I am not an artist by any measure of the word, but it meant a lot to me at the time. I posted it on Facebook.

In April 2018, we had new flooring put in most of our house. I gave a copy of my first book to both of the workers. 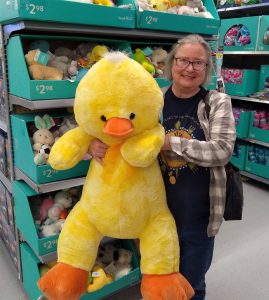 March 31st, I had my husband take a picture of me by a stuffed animal big yellow duck. Just an example of me being silly.

June 2, 2018, my husband helped me set up a yard sale in our front yard. It was the first yard sale I had ever had. Mostly give away stuff (to get rid of stuff), but it was a monumental experience for me. I even sold a customer a copy of my first book.

ACE Toastmasters, also in Cincinnati, was the first toastmaster club to whom I read an early version of my story. It wasn’t very well put together at that point, but one of the members said “I think your second book will be better than your first.” I didn’t believe her at first, and wouldn’t for quite some time. (I really loved my first book, “Flip Flap Try . . . A Cardinal’s Journey”.)

August 2, 2019 was the day I sold the 300th copy of my first book to someone, a good friend of my sister Brenda. August 8th, my husband and I saw the penguins at the Toledo Zoo. I had my husband take a picture of me by a stuffed animal gray hippo. August was around the time I finished working with my book coach. 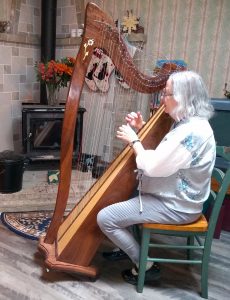 Around June 2020, I did make some final (at the time) changes with the words of my second book and sent it on to the illustrator. My husband finished building the harp he made from scratch for me on June 12, 2020. A symbol of love and joy which we are working into a new logo for my business, Morrow Circle Publishing.

By the end of 2020, my second book had a title: “A Penguin Family . . . Finding Joy”. The finalizing of my book has spilt out into the first quarter of 2021. We will be celebrating World Penguin Day on April 24th. I hope to have my book ready for publishing real soon. I have learned many things in the process of it’s creation (the importance of relaxing, taking time for myself, and working with the challenges of unknown variables) and am thankful for everyone hanging in there till we figure it out and get it ready to share it with the world. It’s a great story and the illustrations are fantastic! We’ll get there!